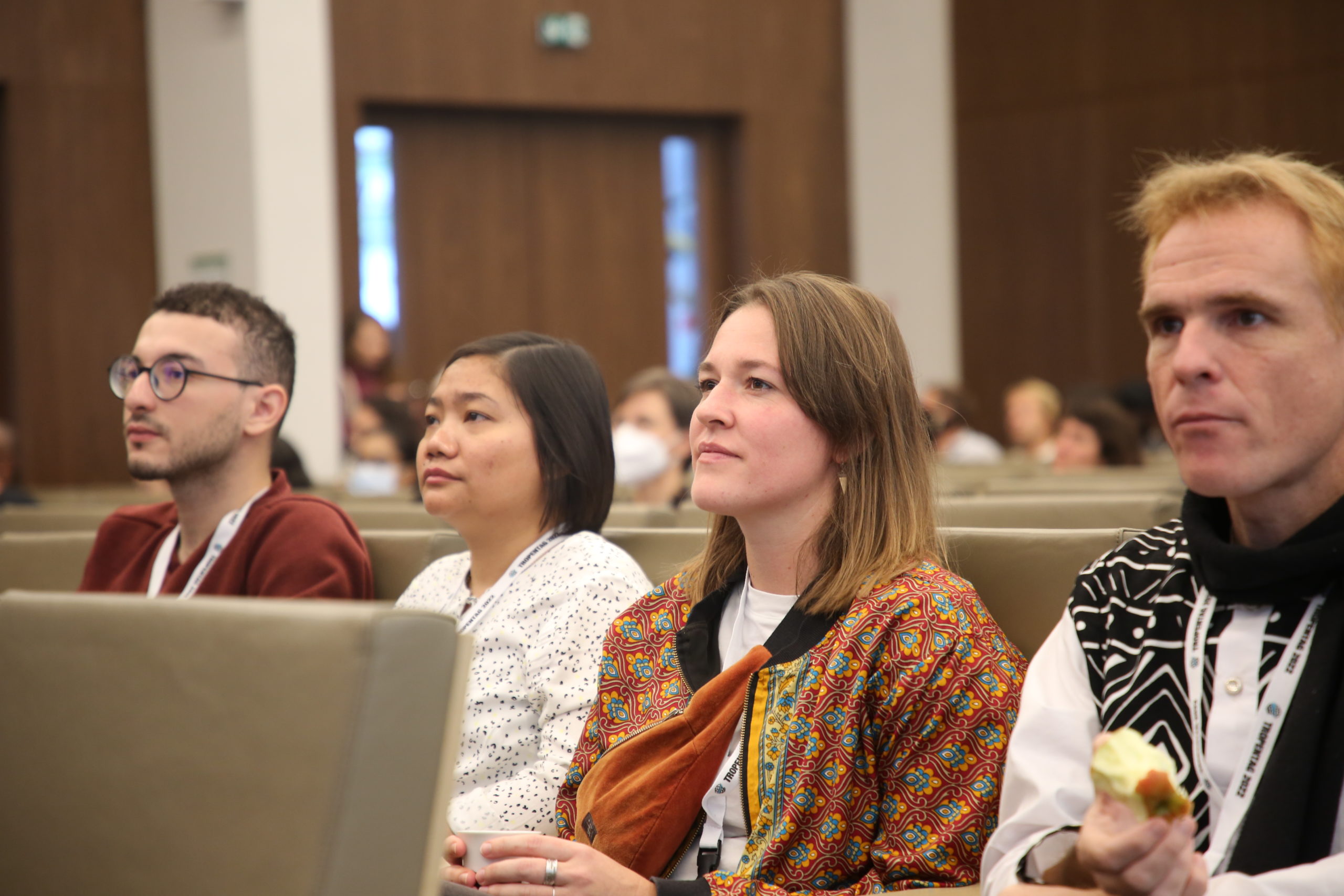 The final plenary session of the Tropentag Conference 2022 would take place in the Aula Ceremony Hall of the Czech University of Life Sciences Prague (CZU). Three keynote speeches were prepared to conclude this 3-day event, focused on answering the question: can agroecological farming feed the world?

A friendly energy filled the Hall after all the interactions from previous events. Nostalgic comments could be heard from attendees on the last session coming up. Farmers that took part of the initial plenary discussion seated now on the first row to capture the messages to be delivered. What was a whiteboard two days before was now full of illustrated stories from this year’s conference.

“Thrilling and beautiful” were the words chosen by Bohdan Lojka (CZU) to describe the past days, letting the audience remember they had all danced together, and now it was nearly the end. As he passed the word to Patrick Van Damme, Dean of the Faculty of Tropical Agriculture at CZU, to introduce the first of three key note speakers.

First up was Jacobo Arango, environmental biologist at the Tropical Forages Program at CIAT, Colombia. His speech began with the recognition of the importance of sustainable livestock production systems, highlighting the multiple functions of livestock, such as food, nutrition, income, and work force, to mention some. What was once widely practiced throughout the world as family farming or mixed crop-livestock systems, shifted to specialized livestock production systems. This decoupling has brought competition for food between livestock and humans.

Jacobo continues to define agroecology, as a scientific discipline, an empirical practice, and a social movement. With concrete examples he tried to explain each of the 13 principles of agroecology, and why these should be mainstreamed to common agricultural practices. From reducing emissions and improving absorption of CO2, to the reduction of external inputs such as feeds, chemicals and water, and even an increased soil health could be evidenced by the choice of improved forages with legumes. A simple step towards an agroecological transformation of livestock production systems.

As an outlook, the message is that agroecological dynamics are gaining the interest and understanding of researchers, particularly in relation to improved forages and their integration to crop-tree-livestock systems. Nevertheless, knowledge gaps still need to be covered, regarding tolerant species, impacts on the food system level, and infuential communication to promote products from agroecosystems based on agroecological principles.

Larisa Mies Bombardi was the presenter of the next key note speech. She is a professor at the Department of Geography in the University of Sao Paulo, Brazil, and specialist in the subject of pesticides for advocacy and policy development. An initial statement to start her speech is that agriculture is no longer synonymous with food production. It has turned into commodities and agroenergy, addressed to industry instead of humans. She recognizes how industry needs agriculture to stay alive, and goes on to depict the means it uses to reach this end.

Through a display of actual facts and numbers of the impact of chemical dependent agriculture in Brazil, Larissa shocked the audience. With sales increasing year after year, the pesticide exportation industry, controlled by the EU, China and USA, is also dominating the sale of seeds worldwide. Focusing on the bilateral trade between the EU and MERCOSUR, Larissa highlights the asymmetry in this relation, manifested in the type of products exported by each region. On the macro level, soya bean plantations reaching an area larger than the size of France show the enormous land extensions required for such productions, increased by six times in the last 45 years. With this, environmental and social impacts have arisen, with clear examples of deforestation and intensive use of pesticides. The latter increased by over 70% in Brazil during the last ten years.

On the micro level of this asymmetry are the substances prohibited for use in the EU, but exported and absorbed by the environment and the bodies of the people of Latin America. Graphics shown with estimates of over 2 million people poisoned by pesticides in Brazil during the last ten years, including infants, left a bitter feeling in the air of the Aula Hall. The cry of a baby in the audience synchronized to this precise moment, enhancing the sensations around this troubling issue. Larissa reaffirms, with numbers doubled of people starving in Brazil during the last seven years, while production is increasing, “…this is not food production, but commodity production”.

The last section of Larissa’s speech focused on agroecology as a path in the face of chemical dependent agriculture. She presents the case of the Landless Workers Movement (MST) in Brazil to portray the radical changes that have been able to occur through the use agroecology principles. The most clear example is that during the pandemic they donated more than 7,000 tons of sustainably produced and nutritious food to the population in hunger in Brazil. It has not been an easy path for the MST though, they have had to face big corporations that threaten their food sovereignty, and they have had to go through many knowledge exchange processes in order to spread agroecological practices throughout the 17 million acres of productive lands where peasant families have settled with help of the MST. Larissa concludes that agroecology can and must feed the world, a more than urgent transition is needed. The question she poses to the audience is: when? Ecstatic applauses covered the Hall, reflecting the appreciation and respect of the audience for the work of Larissa.

“Let’s take the question of when? forward.”

Patrick Worms, a Senior Science Policy Advisor for CIFOR-ICRAF, gave the last key note speech for the Tropentag Conference 2022. His presentation titled “It’s the economy, stupid!”, caught the attention of the audience right away. After explaining his position of a science communicator, and showing his love for agroforestry and its functions, he argumented that in a world that cares about money, the discussion should consider this a core aspect.

To put his words in context, Patrick takes the audience to the Sahel region in Africa to share the challenges, such as desertification and poor governance, but also the opportunities like a young population, large aquifers and high potential value chains. Caring about money, he says, means looking at the human development index. This way a coalition was formed to put agroforestry in action, and the The Great Green Wall project shifted from only planting trees, to multiple systems supporting the livelihoods of smallholder farmers and local communities.

He stresses that smallholder farmers are the most valuable asset in the mission of feeding the world. Classifying discourses related exclusively to large scale agriculture in this mission as “bullshit”, he recognizes that small farmers are more productive and profitable, and that machines are not nearly as clever as a human being. Without the commitment and participation of smallholders and communities, nothing will happen. This is why their objectives need to be understood, and policy barriers should be removed, to support the inclusive development of locally negotiated and enforced common pool resources management rules.

According to Patrick, motivating people the right way and giving them good advice is key to restoring landscapes. After showcasing concrete examples of this linked to agroforestry and how it is tackling food nutrition and climate change, he goes to accept that this does not solve the problem…”it’s the economy, stupid!”. Finding the ways to consumer behavior and developing businesses for people to thrive in those landscapes are part of the answer. Along with this should be an enabling government producing policies to support this change.

Comparing the cashflows of agribusiness vs. agroecology, it is evident why the future is not promising in a world stressed by food systems simplification. The “miraculous pesticides” have had the effect of the most wanted gift under the Christimas tree, shadowing all of the other tools and putting agroecology way in the back in one of the darkest corners. Using the analogy of agriculture as a table with three good legs: genetics, mechanization, and chemistry; and a broken leg: agroecology, Patrick insists, we must repair the fourth leg. Free widespread advising is needed in this sense to support farmers that are trying to survive in a difficult world.

There is no silver bullet to the question of how to feed an increasing population. Nevertheless, agroecology principles make sure to sustain the landscapes where it is practiced, providing long-term solutions to this multidimensional issue.