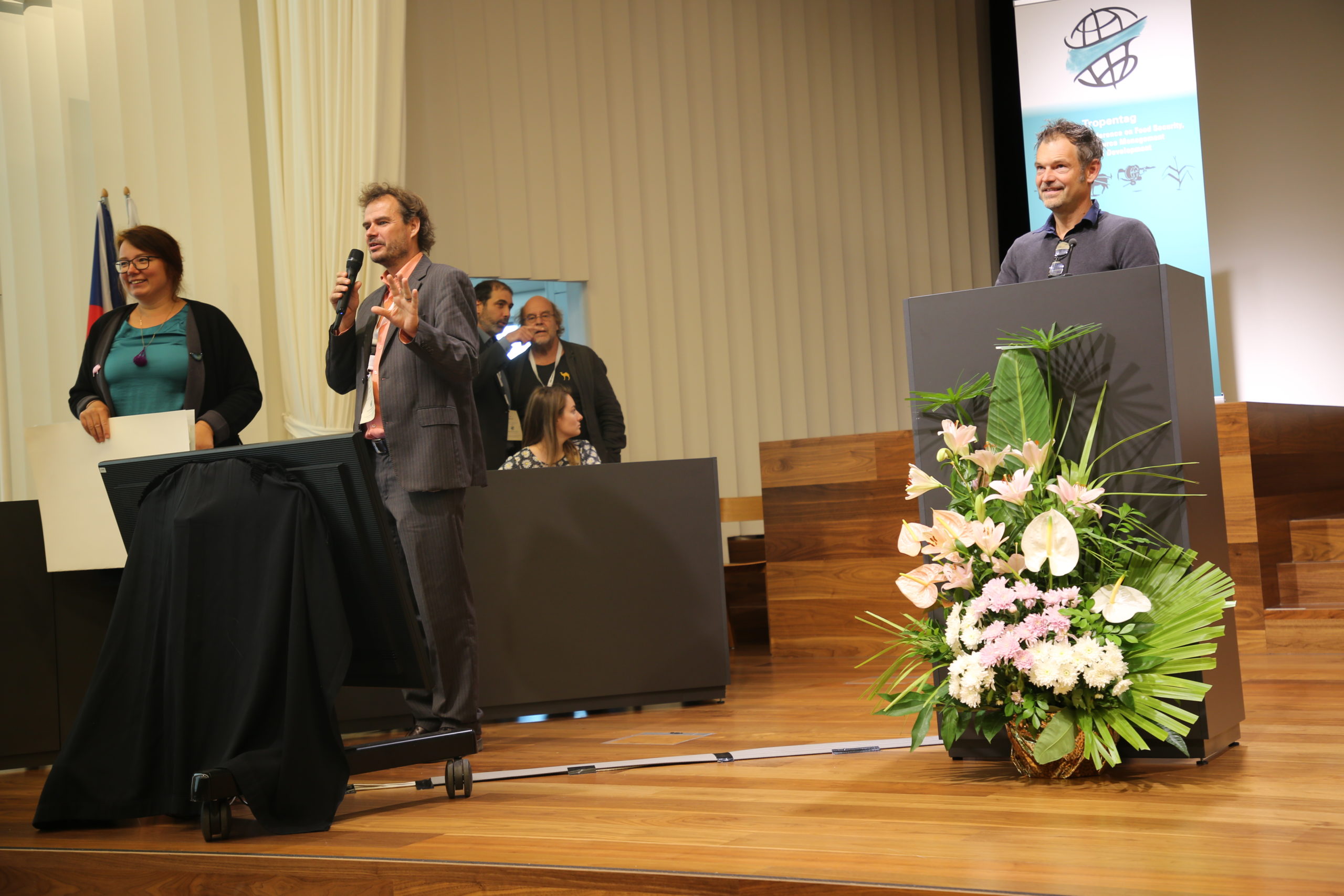 After an impressing plenary session, the Student Reporters prepared a short film to review the last three days of the Tropentag conference, which showed the atmosphere of the conference and excerpts of interviews made. When people were asked to describe the conference in one word, they mentioned things like: fighting malnutrition, diversity, communication, internationality and sustainability.

The first winner for the best poster was Huyen Chau Dang from the Leibniz-Institut für Agrartechnik und Bioökonomie in Germany with the topic “Recycling resources from coffee by-products via hydrothermal conversion for sustainable coffee farming in Vietnam.”

The second winner was Teresa Latorre Carrascosa from Universitat Politècnica de València in Spain with her topic “Comparison of voluntary certificates as promoters of sustainable viticulture.”

The third winner was Md. Shahin Alam from the University of Kassel and Georg-August Universität Göttingen in Germany with the topic of “Potential impacts of urbanization processes on dairy cattle health in greater Bengaluru, India.”

The fourth prize went to Sebastian Ayinbisa Yanore from the University of Ghana in Ghana who was giving an online session on the topic of “Biochar improved gravelly soil water and fertilizer use efficiency and the yield of pearl millet (Pennisetum glaucum).”

The fifth winner was Hannah Fülbert from the University of Heidelberg in Germany for her poster with the title “We need to go back to the time of our grandparents: Perceptions of health and environmental aspects within a rapidly changing food landscape – findings from a qualitative study conducted in urban Burkina Faso.”

The hope behind these prizes was to motivate participants for next conferences to participate again and maybe even improve their posters.

The main idea of the photo competition is that one picture can tell more than 1000 words and a photo-story even more. It is this year the third time that they have hold that kind of photocompetition. Before announcing the prizes, the jury gave some hints to provide good photos, for example that every photo should have a scientific background, eye-catching motives, and interesting perspectives.

For the photo competition there were two categories: single photo and photo-story. This time it started backwards. The third place prize for a single photo went to Gabriella Traoré for a picture in Burkina Faso. The winner of the second place prize was Martha Kifleab with a picture in Ethiopia and the best photo came from Nandar Chan where she took a picture of a local community in Myanmar with a traditional landscape.

The photo-stories had two winners on the third level. One was Kataryna Tuzhyk with a photo story in Uganda was about working people on the field and about the effects of climate change. Lea-Sophie Hansen was the other winner of the third place prize with a photo-story in Kenya, were we see people living in harmony with nature. The second winner was Veronica Mwangi who showed a slum landscape in Kenya. The first prize went to Giovanna Miguel who participated for the second time in the competition and prepared a photo story in Peru, with the support of ATSAF, where we could see glaciers affected by climate change and peruvian women on the field.

Every prize was accompanied by applause from the audience.

After the award ceremony, the CZU advertised their cooperation with the University of Hohenheim and the opportunity for students to achieve a double degree in “Agricultural Sciences and Farming Systems in the Tropics and Subtropics” starting in 2022/23.

Finally, the next Tropentag was announced and it was pointed out that everyone is very welcome to visit next year’s Tropentag in Berlin, from the 20th to the 22nd of September in 2023, with the title “Competing pathways for equitable food system transformation: trade-offs and synergies.” Through the cheerful reaction of the audience, we can assume, that people are very looking forward to the next Tropentag conference!

2 thoughts on “Tropentag in one word? Diversity, Communication, international, sustainability…”