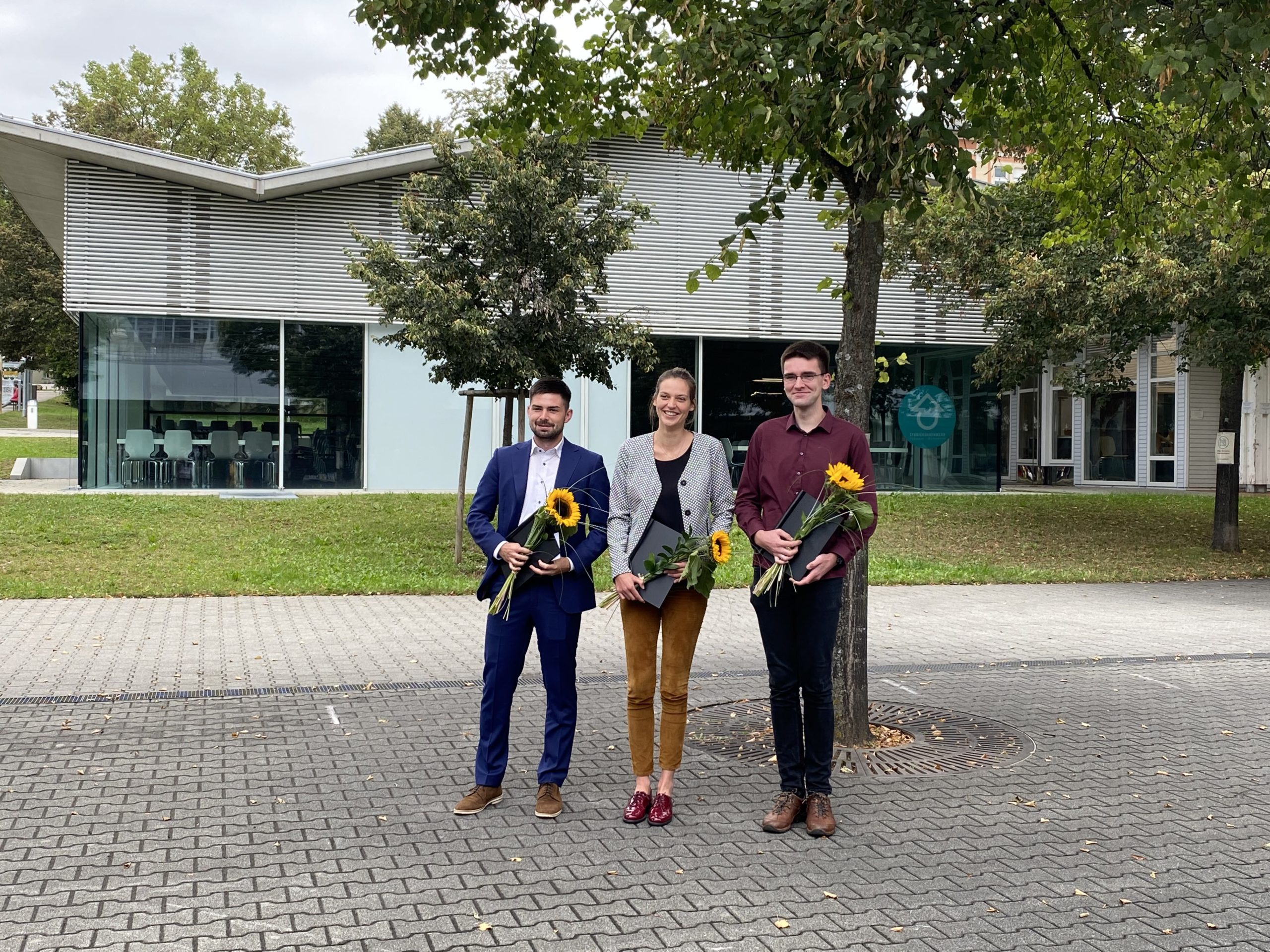 Eight applications later, from universities within and outside Germany, the winners of the Hans Ruthenberg Awards for 2021 were finally announced in Hohenheim on Wednesday. As a reward for Scientific excellence, the Hans H Ruthenberg award is open to participants from all over the world. The main considerations taken into account by the selection panel are research innovativeness, creativity and relevance for food security. On the personal side, a strong profile, reference letter from the thesis research supervisor and of course a convincing motivation letter also increase a candidate’s chance of being selected for this prestigious award.

Ella, Kai Steffan and Jesser are at first glance, just any other set of students. Ella Kirchner strode confidently onto the stage first. She seemed quite collected, even as she picked up the mic to present her award-winning Master’s thesis to the audience. Ella’s scientific investigation explores the much-contested trade off between running a profitable financial institution and fulfilling effectively the microfinance objective of providing small loans to the poor/financially excluded. What is so special about her work is that Ella’s research developed a novel Social Performance Index based on 6 dimension variables and constructed using a common statistical technique PCA (Principal Component Analysis).  She found that while Financial performance remained the same, Social performance improved over time. Moreover this was the First social performance index applied in a scientific debate. Research, she recommends, needs to catch up with microfinance reality.

As Ella walks off the stage, Kai Steffen walks in. Kai looks a little more reserved than Ella, but from his expression, one can still read the eagerness to share his work. We later on learn from Professor Regina Birner, the session’s host, that Kai, like Ella, is also currently obtaining a Phd at the moment after concluding the Master’s degree. Kai is receiving the prize this year for his research on the role of elevated temperatures in graft formation. Kai found out that increased temperature by 7 degrees C causes graft formation 3 days after grafting. For this, a temperature dependent auxin is responsible. Applying the findings of his research, Kai and his team were able to increase the grafting success of a procedure from 2% to 90% via temperature increase. As you might guess, this is extremely useful for improving grafting protocols for practical use in agriculture and plant breeding. Besides his studies, Steffen also has lots of international and voluntary work. He has co-published several papers.

Next up came Achim Jesser, suave and gentlemanly in a crisp blue suit. His innovation of seedball machines in Niger will hopefully help smallholder farmers in the Sahel become more productive and profitable. Seedballs are simply molded balls of soil and manure, with seeds planted in them. Research has shown that they may eliminate the labour of ploughing or digging holes for seeds, because seedballs provide many of the advantages of ploughing, with much less labour and no machinery. Usually, farmers make these seedballs locally by hand but with Jesser’s machine, creating a seedball takes about 40% of the time it would usually take, meeting both of his initial objectives of removing entry barriers for farmers and making their work more effective. The results were highly impressive, with 13x more desirable seedballs produced per min and a more efficient substrate usage. The result is that seedballs become readily available, output rises, costs reduce etc. With  this method, smallholders can save time, and money by importing less fertilisers. Jesser’s prototype was adapted to local conditions and has already been deployed to Niger.

Read more about the winners and their topics here.

In the Engine room: from Posters to the workshops!

Going With the Flow: Peer Pressure’s Effects on Drought Insurance Purchases in Uzbekistan